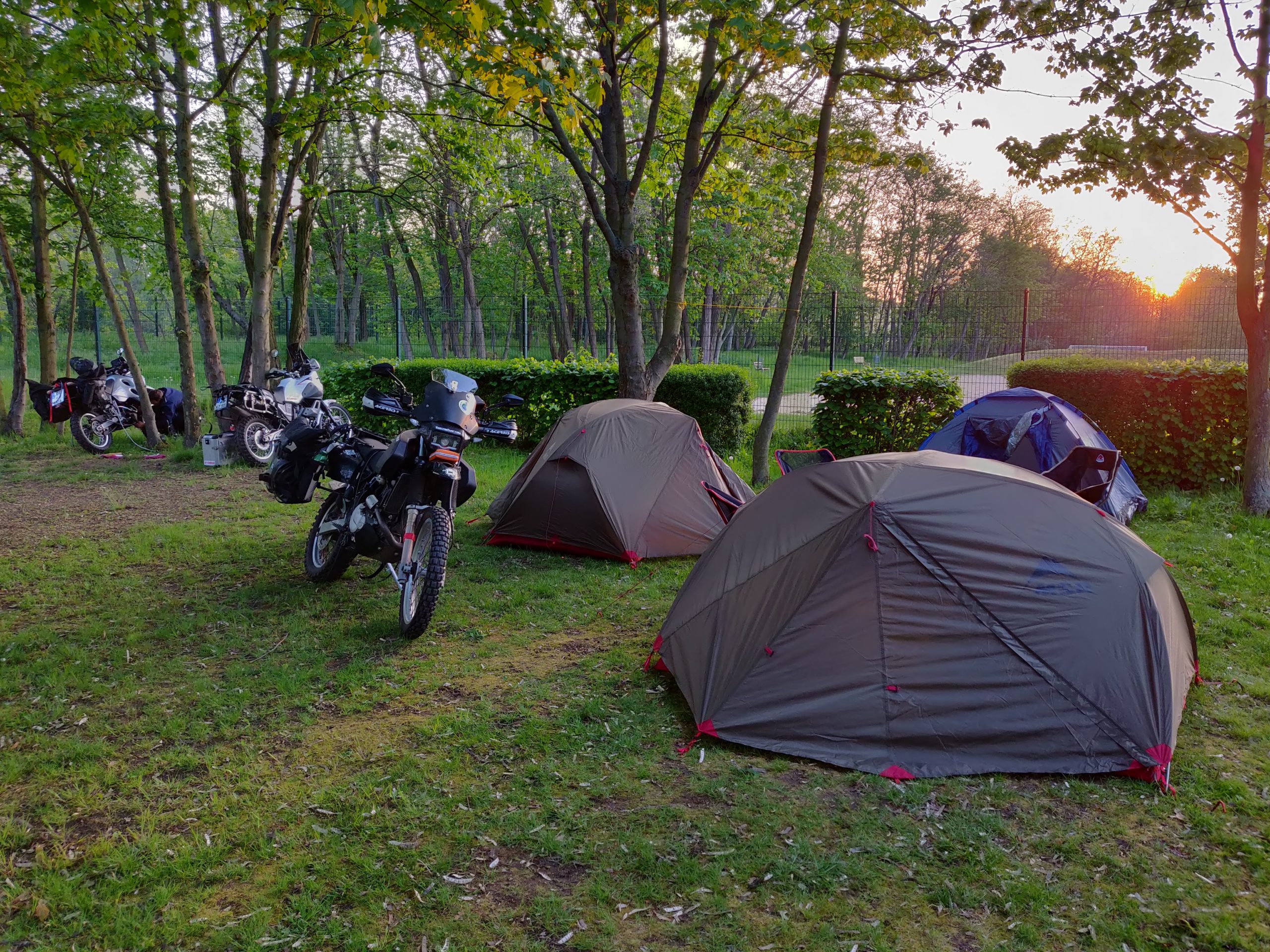 Many ride reports describe the hectic last days before departure. Final repairs, shopping parts and planning take a lot of time. This shouldn’t be the case with us, so we tried planning a lot of time for everything. The last engine was already assembled two days before departure, the last spare and add-on parts arrived early enough on the last day before departure, and the last night is still long enough for packing all the equipment. So on May 1st we start the first stage of our trip towards the Czech Republic, accompanied by some friends and both sceptical and optimistic at the same time.

Thanks to the good weather we almost reach the border before sunset and set up our first camp of the trip. Minor issues like a leaking ignition cap can be repaired with half a tube of Dirko in no time at all.

After a short ride on the motorway we arrive in the city of Prague. We are allowed to safely store the motorcycles on the company premises opposite the hotel. And so we walk in  sunshine towards the city centre, looking for our next meal.

Here we work our way through the crowds on Charles Bridge, Wenceslas Square and at the town hall clock and past countless Trdelnik stands. Trdelniks are actually a Slovak pastry, which is formed into a roll on sticks over an open fire. Filled with Nutella, jam or ice cream, they can be found at every corner in the city centre.

After the overcrowded city centre of Prague and the dense traffic already tired us, we decide to skip the originally planned detour to Budapest and leave the Czech Republic directly via Slovakia and Hungary for Romania. Even before Prague has completely disappeared from our rear view mirrors, it starts to rain and we enthusiastically unpack our rain gear, happy to finally be able to test its functionality. So in the next few hours the endless oilseed rape fields and construction sites of the Czech Republic pass by our wet visors.

After a two-hour stop at Turbo Pizza (the name is not quite accurate) the leftovers are strapped onto the aluminium suitcases and taken to the next camping spot. Which seems not to be so easy to find at this time of the year, instead of welcoming camping fields we only find closed gates of the campsites. But in the end we find someone who lets us onto the meadow with the promise of clarifying everything else in the morning. Our lonely tents and the empty swimming pool probably mean that we are still a little outside the local holiday season. After defending the remaining pizza against hungry ducks we replace the regulator of the DR to get to the bottom of the constantly fluctuating charging voltages.

The big question of the next morning was, how much did the overnight stay cost us? 120 czech crowns? Before anyone notices that he miscounted something, we already sit on our bikes and are crossing the border to Slovakia a little while later. The first few kilometers riding the charging voltage of the DR is okay again, but then it breaks down completely and the battery is discharged during the ride. The problem is now suspected to hide in the alternator or in the wiring harness, and in order to save us further jump-start attempts, the problem is taken a closer look at the roadside. And after a short search the error is found, a small cut on the back of the red cable on the regulator ensured that the cable could oxidize completely over time and has only sporadic contact. After the repair, the charging voltage is fine again, but constant misfires make the ride less fun. So the old regulator, which delivers a constant charging voltage of 13.6V, is reinstalled in front of a passing wedding party. While unpacking the tools for the repair, it was also discovered that the KTM had vibrated its tool kit out into the wide world while driving. Someone in Slovakia is now is the happy new owner of Proxxon tools.

Held up by the repairs we spend the night still in Slovakia on an actually still closed camping site, in order to wake up the next to pouring rain. Since the weather situation promises no improvement, we reluctantly pack wet tents, towels and sleeping bags, in order to pass the last Slovakian places and the Hungarian border a few kilometers later in unchanged rainy conditions. In the first village after the border, the car in front suddenly shears into the left lane. While we are still wondering whether left-hand traffic has been introduced to Hungary recently, our front wheels are already sinking into the first potholes. Ah, a local! We better make sure to follow him to avoid the worst of the road.

After some wet hours a break and a warm meal is more than welcome, so we enter the restaurant with the start of the MotoGP broadcast just starting at the same time. Lack of planning sometimes ensures the best timing. Freshly strengthened, a further  pit stop at the roadside to repair a leaking radiator hose does not stop us from reaching the next country of our journey and our planned entry into the Trans-Euro-Trail, Satu Mare in Romania!